How To Shut Off Your Tank

If You Smell Gas 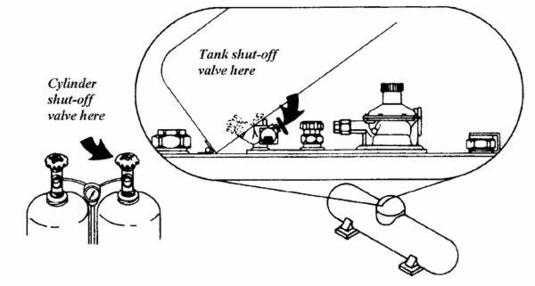 ​​​​​​​​​​​​​​​​​Propane Gas Detectors
Under some circumstances, you may not smell a propane leak. Propane gas detectors sound an alarm if they sense propane in the air. They can provide an additional measure of security.

You should consider the purchase of one or more detectors for your home.

CO2 and Your Safety
WHAT IS CARBON MONOXIDE (CO)?
You can’t taste or smell CO, but it is a very dangerous gas. High levels of CO can

come from appliances that are not operating correctly, or from a venting system

or chimney that becomes blocked.

CO CAN BE DEADLY!
High levels of CO can make you dizzy or sick. In extreme cases, CO can cause brain damage or death. Symptoms of CO poisoning include: head- ache, dizziness, fatigue, shortness of breath, and nausea.

IF YOU SUSPECT CO IS PRESENT, ACT IMMEDIATELY!

​​​​​​​​​​​​​​​​​​CO DETECTORS CAN IMPROVE SAFETY.
For an extra measure of safety, consider installing a CO detector listed by UL on each level of your home.

TO HELP REDUCE THE RISK OF CO POISONING:

​What Does Propane Smell Like?
Propane smells like rotten eggs, a skunk’s spray, or a dead animal. Some people may have difficulty smelling propane due to their age (older people may have a less sensitive sense of smell); a medical condition; or the effects of medication, alcohol, tobacco, or drugs.
ODOR LOSS:
On rare occasions, propane can lose its odor.

Several things can cause this including:

Since there is a possibility of odor loss or problems with your sense of smell, you should respond immediately to even a faint odor of gas.

Running Out of Gas
DON’T RUN OUT OF GAS!!!!
SERIOUS SAFETY HAZARDS INCLUDING FIRE OR EXPLOSION, CAN RESULT.

A LEAK CHECK IS REQUIRED.
In many states, a propane retailer or a qualified service technician must perform a leak check of your propane system before turning on the gas.

For this reason we recommend that you keep an eye on the gauge on your tank, and order when it reaches 30%.

If you do run out of propane, we strongly recommend that you do not attempt to put the system back into service yourself.

For safety reasons we recommend that you leave the gas off at the tank and call Hayward Propane, or another qualified technician to re-light your pilots and make sure that everything is working properly.

Lighting Pilot Lights
IF A PILOT LIGHT REPEATEDLY GOES OUT or is very difficult to light, there may be a safety problem.

DO NOT try to fix the problem yourself. It is strongly recommended that only a QUALIFIED SERVICE TECHNICIAN light any pilot light that has gone out.

if you light a pilot light yourself.

warnings concerning the appliance before attempting to

Propane is hydrocarbon (C3H8) and is sometimes referred to as liquefied petroleum gas,

Propane is produced from both natural gas processing and crude oil refining, in roughly equal amounts from each source.

​Nearly 97 percent of propane consumed in the United States is produced in North America.

​It is nontoxic, colorless and virtually odorless. As with natural gas, an identifying odor is added so the gas can be readily detected.

​Is Propane Dangerous to the Environment?

No. Propane is an approved, clean fuel listed in the 1990 Clean Air Act of 1992 and is one of the cleanest burning of all fossil fuels.

Propane also is nontoxic, so it's not harmful to soil or water.

Propane is used by millions of Americans each day.

People use propane in and around their homes for furnaces, water heaters, air conditioners, outdoor grills, fireplaces and appliances.

And millions of commercial establishments, including restaurants and hotels, depend on propane for heating, cooking and other uses.

Is Propane Really Convenient to Use?

Yes. Up to 56,000 miles of pipeline and more than 6,000 retail dealer locations make propane readily available throughout the United States. And because propane is stored in portable tanks, it can be used in areas beyond gas mains.

To fuel homes, large tanks can be buried underground because propane is a nontoxic, nonpoisonous fuel that doesn't contaminate aquifers or soil. Refueling a propane vehicle takes about the same time as refueling a gasoline vehicle. And propane is the only alternative fuel with fueling stations located in every states.

Propane is a safe and environmentally friendly fuel that is available now and widely used throughout the United States in homes, on farms, on the road and in industrial and commercial operations.​